Your rights and responsibilities in notifying a Professional Indemnity Insurance claim 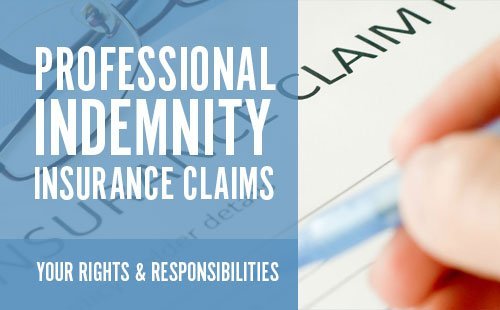 Whether they eventuate or not, it is important to notify all potential circumstances to your Insurer during the current period in order that cover is afforded.

Any fact, circumstance or claim against a professional that a business considers may be worth notifying should be discussed with your broker to determine path of action.

Importantly, when required your Insurer can appoint legal representation from their panel of solicitors.  A relief to policy holders when specialist solicitors are appointed to defend them against an action against them.

What are my rights & responsibilities in notifying a professional indemnity insurance claim?

Claims made policies are used for ‘Professional Risk’ policies as it can be difficult to determine an exact date relevant to financial loss that can occur over a period of time, therefore the date of claim is the key trigger.

The definition of a claim can vary from one wording to another however may be defined as a written or verbal demand by a third party for compensation or damages, or a civil proceeding brought by a third party for recovery of compensation or damages in respect to an actual or alleged breach of professional duty.  Whether they eventuate or not, it is important to notify all potential circumstances to your Insurer during the current period in order that cover is afforded.  This point cannot be stressed enough in order to meet the conditions of the ‘claims made and notified’ basis of coverage, an Insurer may be prejudiced if the claim escalates and they are not able to be involved at the early stages to mitigate loss.

Let’s look at an example:

Ed is an architect and has a Professional Indemnity policy for the period 1.1.17 to 1.1.18.  He makes an error in his role during the policy period on 3.5.2017.  Ed receives a writ in respect to the error during the policy period on 9.11.17.  Therefore Ed is aware of the fact that a claim has been made against him, however Ed thinks the matter is small and he can handle it himself.  He failed to report the matter to his Insurer until after the policy period expired on 3.2.2018 when he receives further demands from his client.  Ed changes Insurer at renewal.  No coverage would apply as Ed reported the matter too late, he had changed Insurer and already knew of the circumstances.

It is important to notify circumstances to your Insurer prior to the end of the period, even if you feel they are unlikely to eventuate or cause significant costs due to the ‘claims made and notified basis’ of coverage, further you may not have foreseen the extent of the error, determination of the other party to pursue compensation or legal costs in defending the matter.  If you don’t notify claims or circumstances when you first become aware of the matter, the later insure may not cover them under their policy, as ‘known claims and circumstances’ are excluded.

Some policies provide a continuous cover clause for on-going policy holders if you were insured with them when the facts first become known to you during the previous policy period and have continued to Insurer with them from then till the actual date of notification and, but for your failure to notify the facts during the policy period, you would have been entitled to indemnity under the policy.