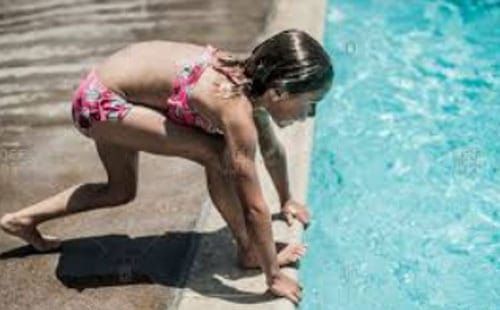 The plaintiff, Karla Lennon, brought a claim for damages for personal injuries against the Gympie Motel (the Motel) after being rendered a tetraplegic on 21 February 1998 when she dived into the motel pool.

At the time of the incident the plaintiff was 12 years of age. She and her younger sister Letita, who was 7 years at the time, had asked their mother if they could go for a swim in the motel pool. Their mother agreed and did not supervise the children.

The pool was fenced and measured approximately 10m by 5.2m, with an internal width of 4.5m. The depth of the pool gradually increased from 0.9m at one end to 1.74m at the other. A sign on the only gate read “all children must be under adult supervision at all times, in pool area. Keys in office. Hours 6AM – 10PM”. There were no depth markers or signs or pictographs prohibiting diving around the pool.

The plaintiff argued that if the Motel had erected signage warning of the depth or prohibiting diving (or both), she would not have dived into the pool and the accident would not have occurred. The plaintiff was unable to give evidence as she had no recollection of the accident. The CLA (Qld) did not apply as the incident occurred prior to its enactment.

The court considered the plaintiff’s character, history and swimming experience and found that, on the balance of probabilities, the mechanism of injury was consistent with the plaintiff striking her head on the bottom of the pool after diving from the deep end.

The court agreed that the plaintiff would not have dived into the pool and hit her head if there had been a “no diving” sign. Despite this, the court also found that the plaintiff was a mature and responsible child with a general awareness of the dangers associated with diving and failed to take reasonable care for her own safety. Accordingly, liability was apportioned at 85% to the Motel and 15% to the plaintiff for contributory negligence.

The Implications for you

This decision serves as a reminder for operators of commercial premises with pools of the types of warnings generally required to avoid liability for personal injury where patrons dive into water of variable depth.  The result in this case was however influenced by the court’s acceptance of the plaintiff as a mature and responsible child who would have obeyed any signs prohibiting diving (that is, was able to establish a causal connection between the defendant’s breach of duty and the occurrence of the incident).

How to propel your performance.
Scroll to top